Extreme Weather...On The Rise? | weatherology°
This website uses cookies to improve your user experience and for analytical purposes. By clicking the "Accept & Close" button, you agree to the storing of cookies on your device while using this site. Please see our privacy policy to learn more about how and why we use cookies.

Flash floods and severe droughts…they seemingly dominate the weather headlines in recent years across the United States, but is this merely a case of the news media focusing on extreme events to grab viewers’ attention? According to a 2018 study by scientists from Rutgers University and the University of Wisconsin-Madison, weather patterns are becoming increasingly more persistent (those lasting several days or more). Furthermore, these multi-day, persistent weather regimes were indeed found to contribute to an increase in the types of extreme precipitation events that often dominate the headlines.

Looking at precipitation data for 17 clusters of stations across the United States (from 1950-2015), the researchers found that since 1996, the frequency of both wet and dry spells (that last 4 or more days) have increased at 41% of these clusters of observing stations. In addition, examining the trends in large-scale, upper-level atmospheric circulation patterns, it was found that weather patterns associated with a warming of the Arctic region (with upper-level ridging across western North America, and troughing across the East) are occurring more frequently.

Along with previous work by the same authors, the amplified warming of the Arctic region is shown to be an important link to why weather regimes are becoming more persistent. As the Arctic warms, the temperature difference between the high and mid-latitudes decreases. This, in-turn, leads to a decrease in the west-to-east component of the jet stream, allowing it to take more frequent dips to the north and south. This “wavier” configuration of the jet stream is more susceptible to forming blocking patterns, effectively slowing the west-to-east progression of storm systems and other “weather makers.” In this way, dry or wet conditions that once persisted only for a day or two over a certain location, are now trending longer in duration. 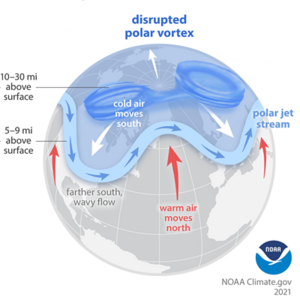 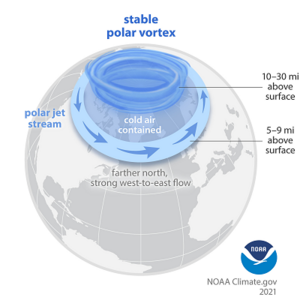