Caves: A Link To Past Climate | weatherology°
This website uses cookies to improve your user experience and for analytical purposes. By clicking the "Accept & Close" button, you agree to the storing of cookies on your device while using this site. Please see our privacy policy to learn more about how and why we use cookies.

Caves: A Link To Past Climate

Information on climate conditions of the distant past, whether hundreds or even thousands of years ago, comes to researchers of the present day from a variety of natural sources. As detailed in previous articles, tree rings and corals represent two such sources. Another emerging source of paleoclimate data comes from caves, or more specifically, cave formations (speleothems). The two most well-known speleothems are stalactites (hang from the ceilings of caves), and stalagmites (mounds that “grow up” from the cave floor).

Most caves around the world form in limestone rock. When rain falls, carbon dioxide in both the air and overlying soil combines with the water to form a weak acid, called carbonic acid. As this carbonic acid solution encounters limestone in the ground, it enters through joints and fractures in the limestone and begins dissolving the rock. Over long periods of time the dissolving of the limestone widens these cracks into cave rooms big enough to walk through. Stalactites and stalagmites are composed of calcium carbonate which precipitates out of solution as it encounters air at the cave ceiling. This calcium carbonate is then deposited on the cave ceiling to slowly form stalactites, while solution that drips to the cave floor forms stalagmites.

The important aspect of the speleothems to paleoclimatology is the ratio of oxygen isotopes oxygen-18 and oxygen-16 in the drip water that formed them. This ratio can be measured in the various layers of the speleothems and the layers can also be dated to reconstruct a history of the local climate. A recent study headed by scientists from the University of New South Wales – Sydney examined data from 39 caves on five continents and determined that for caves found in climates where the mean annual temperature is less than 10°C, the oxygen isotope ratio of the cave drip water was similar to that found in the local rainwater. However, in areas where the mean annual temperature was warmer, some of the water evaporates before it reaches the groundwater and caves, and thus the oxygen isotope ratio of the drip water in these locations only tends to indicate heavy rainfall events or changes seasonally. Thus, the clearest climate link between past precipitation and oxygen isotopes in speleothems is found in the cooler climate caves of northern Europe, northern North America, the high-altitude and northern regions of the Asian monsoon, and New Zealand. 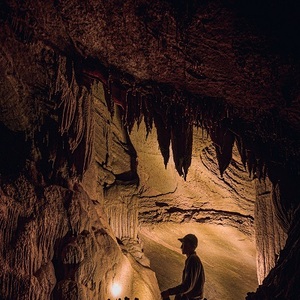 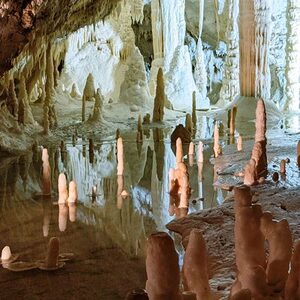