The Winter Solstice this year will occur on Friday Dec 21st, 2018 at 4:23 pm CST.  This is the start of the astronomical winter, and also the day with the least amount of sunlight in the northern hemisphere.  The reason for this is that the Earth is tilted about 23.5 degrees on its axis and rotates around the sun, blah blah blah.

Let’s get to something a little more interesting, like where does this term “solstice” come from?

The word “solstice” is derived  from the Latin word “solstitium,” containing “sol,” which means “sun”, and the past participle stem of “sistere,” meaning “to make stand”.  Then the Middle English speakers shortened solstitium to solstice in the 13th century. And that is where word comes from.

Why would anyone want to call something that?

This is because the earlier people observed that the sun at noon would track lower in the sky, relative to the horizon, for many months, and then would track higher in the sky for many months. On the days surrounding the change in direction, the sun would appear not go up or down, but remain at the same location above the horizon.  The sun would appear to stand still.  So in the winter, the day the sun stops heading further south towards the horizon at noon is the Winter Solstice.

Download our app at the Google Play or the Apple App Store and see when the sun rises and sets in your area! 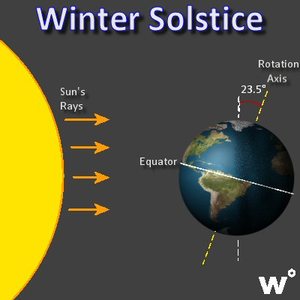 The angle of the light and the tilt of Earth.
Next
Professor Paul Thursday - Dew Point vs. Relative Humidity