Over the past 40 years, the improvement on advanced warning for tornadoes in the United States has improved markedly. Back in the late 70s and early 80s, warning lead times only averaged about 3 minutes, whereas today they are closer to 13 to 14 minutes. Even with this improvement in lead time, though, there are still a significant number of “false alarm” tornado warnings that occur each year, with around 70% of all tornado-warned storms failing to produce a tornado. A recent study by researchers from Penn State and Stony Brook Universities, as well as the National Weather Service, delves into radar data from the latest generation of polarimetric radar to see if the size, shape, and location of raindrops in a supercell thunderstorm can help better differentiate between storms that produce tornadoes and those that do not.

The latest generation of weather radars across the U.S. transmit radio waves that vibrate, not only in the horizontal direction (as most radars have since their invention), but also in the vertical direction, too. These polarimetric or dual-pol radars are thus able to distinguish, not only how heavy precipitation is, but also the size, shape, and type of radar targets, be they droplets, crystals, hail, insects, etc. After analyzing dual-pol radar data from hundreds of rotating supercell thunderstorms across the country, the research team found a noticeable pattern that distinguishes which ones tend to produce tornadoes. This difference deals with the location of regions with large, sparse raindrops and regions more dense with smaller drops. In tornado-producing supercells, these two regions of the storm are oriented more perpendicular to the storm's motion, while in non-tornado-producing supercells they are oriented more parallel.

In the course of this study, the research team created a computer algorithm which can analyze live radar data and provide feedback to meteorologists on the likelihood a certain storm will produce a tornado based on these latest findings. Although more research will have to be done, both on simulated supercells in the computer domain and on real-world storm events, the researchers hope this new algorithm may one day serve as one more tool to cut down on tornado false alarms and improve tornado warning lead times.

Radar view of the supercell thunderstorm which produced a tornado in Tuscaloosa and Birmingham, AL on April 27th, 2011 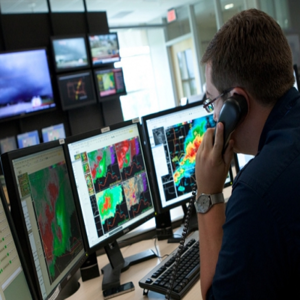